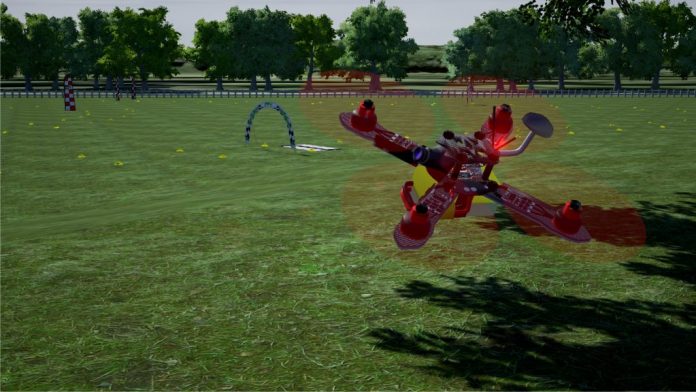 Why would you want a drone simulator? Well, flying drones can be an expensive hobby, and unfortunately, practicing is no exception. If you buy a cheap drone, it tends to be cheaply made and not particularly robust. This means that if you begin to attempt to practice and improve your skills in order to compete in drone racing competitions, there is a good chance that your drone will end up broken. In addition to this, a cheap drone won’t give you the speed nor the fine control of a racing drone, so when you finally do move onto a more expensive model, you will essentially be a beginner again. Fortunately, there is a much more cost effective solution. Drone simulators allow you to hone your drone racing skills, without destroying your wallet. Here is a list of the best drone simulators currently available on the market.

There isn’t too much to say about DRL that isn’t positive. This is the official drone simulator of the Drone Racing League. Not only is it endorsed by the DRL, but they’ve also used it for the pre-qualifying event during the 2017 world championships. The simulator is reality-based, incorporating realistic physics, realistic drone weigh, and real life racing tracks and courses. The ability to play online multiplayer means that the practice you get in will get you ready to compete at the highest level. With options to customise your drones and use your RC controller to control your simulated drone too, this simulator really does ramp up the realism to a high degree.

Although Hot Props doesn’t have the official real life courses that DRL has, it does have a lot to offer. Most notably, this drone simulator includes the ability to edit the physics of the simulator. While you could use this to find out what it would be like to race a drone on Mars or the Moon, there is a much more useful way to use this feature. With sliders to change every aspect of what affects the physics of the simulator, you can make sure that the drone feels just like your own personal drone. This gives you the ability to not only practice drone flying techniques, but also allows you to practice flying a drone that feels close to your own quadcopter. With the ability to control a simulated version of your own drone, the Hot Props simulator offers a very effective way to practice your aerial manoeuvring skills.

Drone Simulator On A Budget

Don’t let the name fool you, the FPV Freerider isn’t actually a free drone simulator. It is still inexpensive, however, costing only an affordable $5 USD. While it is slightly older than most other simulators on the market, it has a number of excellent features to make it worth the tiny outlay. The Freerider has realistic, and adjustable physics. In addition, if you own a real drone, the software provides you the ability to adjust the sim so the drone handles emulate your real drone. You can also adjust the field of view and camera tilt to make sure that you get a view that is similar to what a real quadcopter offers. For such a small price, this simulator really does offer more than its money’s worth.

Drone Simulator For A Price

No, it’s not a new dinosaur for Jurassic World 2. It’s a top drone simulator on the market. While it does cost a lot more than most of the other simulators out there, $20 USD is still not a huge amount, especially when you consider how much it would cost to replace real broken drone parts in the event of a crash. The features for Velocidrones are extensive. It has the ability to alter the physics within the simulator, giving you the ability to cater the feel of the on screen drone to your own personal drone. This is just the tip of the iceberg though, while Velocidrones doesn’t offer the official tracks like DRL does, it does give the opportunity to create your own tracks with it’s in built track editor. In addition, you can share your tracks online with other users, meaning that you have access to their tracks as well. All of this adds to an incredible amount of tracks, and the possibility of some tracks very similar to the official ones being out there for download. The obstacles are animated too, so you can have moving obstacles to really test your flying skills. Velocidrones also has an online multiplayer option so you can challenge yourself against opponents, and a time attack mode so you can go out there and just set the best time possible. Velocidrones might have a higher price than most other simulators on the market, but in our opinion, the large list of features make it worth the extra bucks.

Rotor Rush is the most expensive drone simulator on this list. However, it is also significantly the most in depth. At $4 USD a month, it is still a lot cheaper than repairing your real drone every time you crash it. Rotor Rush provides official tracks from some of the world’s top drone racing organizations, and it has real time online multiplayer racing with actual race directors and commentary. If you contact the Rotor Rush team you can get an in depth track editor so you are able to create whatever your mind can imagine inside a comprehensive CAD editor. The CAD editor is awesome, so the course availability really extends as far as your own imagination. All in all, you will pay more for this simulator than you would for any other, but it will offer you the most in depth and realistic experience available.

That concludes our search for the best drone simulator currently on the market. Remember, it’s definitely better to practice virtually first, since virtual repairs are free!

Check out our breakdown of the best drones for kids.

Drone Simulator – Which Is Best?