Drones are extremely popular right now – and there’s no exception when it comes to kids. As the technology continues to rapidly advance, drones are now more affordable than ever. For under $100, there’s dozens of small drones that are packed with features and are great for kids and entry level adults. Factoring in  a few variables  inlcuding price, ease of use, features, and cameras, we put together a list of a few of our favorite drones for kids.

The Best Drones For Kids

The Hubsan X4 (H107C) 4 Channel 2.4GHz RC Quadcopter is one of the most popular quadcopter drones for kids. As one of the few affordable UAVs that comes camera equipped, this little guy is a blast – even for adults. It’s easy to fly and utilizes the same controls as the larger professional drones, so it’s a great model to learn on. The Husban X4 H107C comes equipped with a 0.3 megapixel camera capable of video, but you’ll need a micro SD to record with it. It flips in four different directions at the flick of a joystick, and lights up in the dark. The battery provides about 7 minute flight times and charges back up fairly quickly.

The AUKEY Mini Drone is tiny – but it packs a real punch! The perfect UAV for kids and beginners, it’s small and very easy to fly. There’s 3 varying speed options and the ability to flip in all four directions at the push of a joystick. The 4.5 inch pocket-sized quadcopter weighs in at a incredible 3.2 ounces and has a 25 meter (82 foot) operating range. Perhaps most impressive, the AUKEY has a one button auto take-off and landing function, so you can get airborne in no time. The AUKEY mini also conveniently ships with 8 replacement blades.

The GoolRC CX-10C Mini Nano Quadcopter weighs an amazing 4 ounces. Despite its size, they packed a functional 0.3 MP camera into it! It flips, lights up with LEDs, and is capable of both photo and video. The battery lasts about 2-4 minutes of flight time, and takes about 25 minutes to charge. The mini nano utilizes the same controls as larger drones, so it’s a perfect, affordable entry into the world of drones for kids.

The JJRC H36 Mini Quadcopter is a stylish, entry level, mini drone. It has a flight time of 5 minutes, with an operation range of 30 meters (98.4 feet). This mini drone is perfect for kids – it weighs in at 6.6 ounces and is about 6 x 5 inches in size. It lights up in the dark via LED lights, perfect for flying after dinner, later in the evening. The JJRC H36 is capable of several awesome stunt maneuvers like 360 degree flips, rolls, and spins. With two adjustable speed levels and a return-to-launching-point button, this mini is a great drone for kids and hobbyists.

The stylish little EACHINE E010 Mini UFO is a really popular drone for kids – the fact that it’s named a UFO and looks awesome is definitely a contributing factor. Some key features of the mini UFO quadcopter include a one-key return to launching point button and full 360 degree roll-over maneuvering. The E010 has a 30 meter (98 ft) operational flight range, LED lights, and a flight time of approximately 5 minutes. An extra set of propellers are also included, so feel free to fly fast! 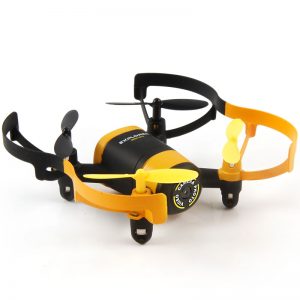 The JXD 512v mini quadcopter was built with kids in mind. It looks more like a toy than most of the other drones on our list, but its limited features may be ideal for the younger kids. Most notably, the shorter flight range of between 32 feet and 49 feet (10-15 meters). This is great for younger kids, since they won’t be able to fly the drone too far out of the backyard and it will remain in their line of sight. The JXD 512v also has a flight time of just 5 minutes, so you can keep an eye on your youngster while they get a quick piloting session in. Believe it or not, this little quadcopter does come equipped with a camera, which is capable of 0.3 mega pixel photographs and video. You can even stream the pictures and videos to your phone in real-time via WiFi. 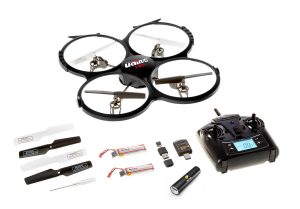 The UDI 818A HD is a popular drone among beginners. It comes equipped with an awesome 1MP HD video camera that’s capable of photos and 720p HD video at 30 frames per second. It has a range of up to 328 feet (100 meters) and a flight time of up to about 8 minutes. The included 2.4G remote control has a small LED display that relays flight information. One particularly cool feature of the 818A is the 360 degree Eversion, where one button will put the drone into a continuous 360 degree roll.

The Hero RC XQ-5 is our favorite drone for flying after sunset. With small LED lights surrounding the entire perimeter of the drone, this little quadcopter looks spectacular at night. In ideal conditions, the LED lights are visible for the entire operational distance – which is up to 492 feet (150 meters). The XQ-5 has a flight time of 8-10 minutes and is equipped with a small 2 megapixel camera. In addition, the propellers are wrapped with propeller guards to help prevent damage in the event of a crash. We really can’t get over how awesome this mini quadcopter looks in the dark – and kids absolutely love it, as the LEDs give them the illusion of a science fiction UFO.

The Syma X11C drone is one of the best drones for kids. A notch up from the mini nano’s, the Syma X11C weighs about 6 ounces and measures about 6 inches in size. Like most of the other beginner drones, it’s equipped with 360 maneuvering and flip capabilities. It’s also got LED lights that flash, making evening flights a breeze for the kids. The camera is a big upgrade from a lot of other affordable UAVs. It has a 2MP High Definition camera that records onto a mini SD card. As another great feature, the Tenergy also comes equipped with a blade protector. This helps to protect the propeller blades from damage in the event of a crash or collision.  Flight time is about 6-8 minutes, with a control range of about 30 meters (98 feet).

The Holy Stone HS170 Predator is likely the most popular quadcopter for younger or entry level drone fans. While it doesn’t have a  camera, the Holy Stone HS170 Predator drone is awesome at flying. It’s wind resistant, with a huge controllable operation range of up to 50 meters (164 feet). This is much further than any other RC quadcopter in its price range. It’s got a flight time of 6-8 minutes and several colorful LEDs. It’s most beneficial feature however, especially for kids, is its “headless flight system mode.” A common problem with inexperienced pilots is the inability to keep the front of the drone facing forward. To correct this, the headless mode reorients the the quadcopter’s controls. This allows the pilot to easily direct the drone despite it’s orientation – so controlling it is a breeze.

The Holy Stone HS170 is one of the perfect entry level drones for kids!

The Hubsan H107D FPV x4 Drone is awesome. Although it’s a tad pricier than the rest of the drones on the list (approximately $99), it’s worth it. We love this thing. The H107D has a significantly better camera than its peers, capturing video at a nice 480p. What’s particularly awesome, however, is that a live feed is sent from the drone camera to a 4.3 inch LCD screen built into the remote controller. We see exactly what the camera sees in first person view (FPV) and in real time.

How To Fly Drones for Kids


While shopping for a drone for your child, you’ll probably wonder how difficult it is to actually fly one. I’ve got good news, with a bit of practice, it’s very easy to grasp! After a few practice runs, kids generally get the hang of the controls pretty quickly. Depending on the age of your child, you may want to help instruct them when they go to fly for the first time.

Here’s a quick rundown of the controls:

Unfortunately, these terms can be a bit confusing. So we made an illustration of the controls using everyday terms that are much easier to grasp: 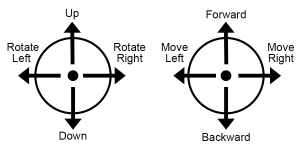 What does take some practice to remember, however, is that these controls remain the same, despite the orientation of the drone. If it is facing you, pressing forward will bring the drone in that direction, towards you.


Flying drones is fun, but it’s important to remember to stay safe! While drones for kids are smaller and weigh less than other large drones on the market, they can still bring about some safety concerns. Here’s a few tips we’ve included to help you and your children fly responsibly and safely.

Supervise your children while they fly.

Keep the drone in your line of sight at all times.

Do not fly over people or vehicles.

Be careful with the propellers, use propeller guards.

Check the laws where you live.

Stay safe! Drones for kids are a ton of fun, but remember that safety comes first!

Once you’re up in the air, check out our aerial photography guide for tips on capturing awesome photographs with your new drone!

If you’re looking for a smaller, more affordable quadcopter, check out our breakdown of the best mini drones.

Thanks for flying by The Flight Bay! Check back often, as we will continue to regularly update our list of the best drones for kids.