When it comes to color grading video, utilizing the scopes is absolutely essential. Not only do the scopes make the coloring process much easier, but they also make it much more accurate. Because monitors and display options differ between models, brands, and settings, you simply cannot rely on just your eyes to properly color video. While your display may not be dependable – your scopes are.

Scopes are included in most of the main stream editing packages, including Premiere Pro, Final Cut, and Da Vinci Resolve.

There’s 4 main scopes you should be using: Waveform, Parade. Vectorscope, and Histogram. 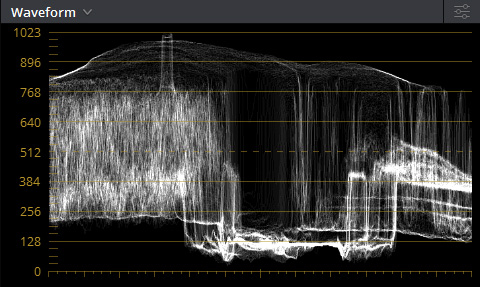 The waveform is used to measure the levels of luminance in the current video frame. As you can see, the frame’s luminance is graphed from 0 – 1023. 0 Represents the blackest possible black, while 1023 represents the whitest possible white, each of which being the point where all detail in the image is lost. The frame’s luminance is displayed from left to right, so that the left side of the waveform scope is representative of the left side of the frame, and vice versa.

This waveform is essential in that what your monitor and eyes determine is the correct brightness of certain areas of your video will look completely different on everyone else’s display. Coloring with the waveform corrects this. 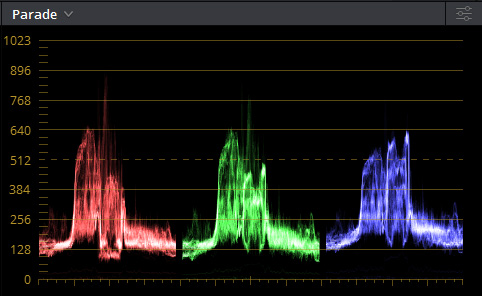 Like the waveform, the RGB Parade also displays the image’s luminance values, but here they are separated into Red, Green, and Blue channels. Each individual color is representative of the entire frame from left to right. This is a helpful scope when trying to balance your colors. For instance, an object that is black in the frame should be at an equal value across all three of these color channels. 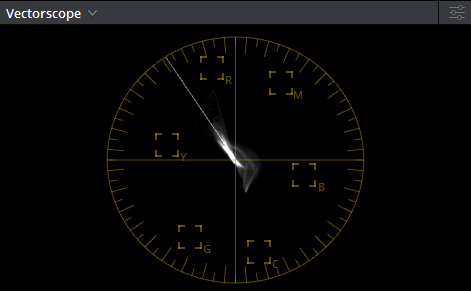 The vectorscope is absolutely essential. It displays the hue and saturation – values that can easily be changed drastically in your monitor’s settings, making your eye completely unreliable. The vectorscope contains six marked points – Red, Green, Blue, Yellow, Cyan, and Magenta. The position of each of these points marks the legal broadcasting level for that color.
The more saturated the frame is, the further from the center of the scope it stretches. The less saturated, the further inside and closer to the middle it will be. Grayscale shades, including black and white, will sit right on the center dot, as they have 0 saturation value.

When the scope shows saturation information beyond a marked limit point, it means you should reduce the saturation of that particular color.

Also important within the vector scope is the flesh line. This line is not displaying information from your video, but is instead a guideline to help you. If there’s a person in the frame, regardless of their ethnicity or skin tone, their skin’s hue should on this flesh line – the difference that our eyes perceive in varying skin tones is really only in the skin’s saturation. So when color grading, try to align people with this line. Often, using a qualifier to select their skin will help you with this. 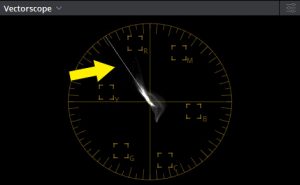 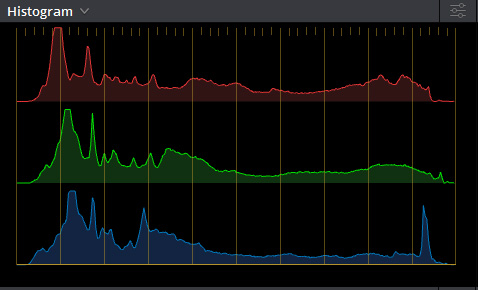 The provides similar information to the RGB parade, except that it is not laid out to represent the image from left to right.

The left side of the histogram scope represents black while the right side represents white. Red, Green, and Blue channels are then graphed by their luminance along this axis.

Hope these tips help! Remember, if you utilize the scopes when color grading, the results will display properly on the majority of screens. 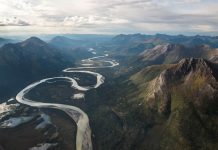 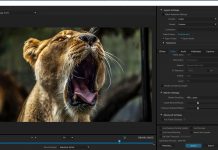 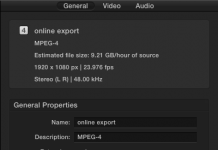