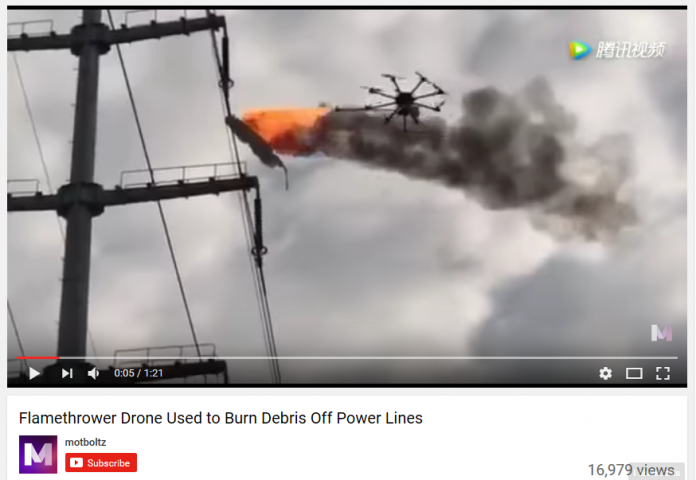 Recent Videos have surfaced that appear to show a drone flamethrower burning debris off of power lines. The videos have surfaced on Youtube from Xiangyang, China, and reportedly depict a power company’s maintenance workers utilizing the UAV flamethrower to literally melt the built-up, hard to clean dirt from the live electricity lines.

While it’s unclear whether this was a one-time experiment or a new practice, there’s no doubting the awesome innovation and ingenuity of it. Usually, the cleaning of power lines requires maintenance workers to climb dozens of feet into the air to clean live lines, risking electrocution in the process. The drone in use appears to be an octo copter sporting eight propellers, although the brand and model are currently unknown. Also unclear is whether or not the drones are camera equipped and using a live feed to aid the cleaning process.

Drone innovation is moving forward at a rapid speed – as we are seeing UAVs not only used for live televised entertainment purposes, but now also implemented in maintenance tasks as well.

More information to come in the future! In the meantime, check out this awesome of the drone flamethrower in action:

Inspection Drone Is Being Used to Inspect Refineries